We have no idea…

Our friends Nathalie and Brian on SV Timmies Run spent a little time in the Abaco Islands recently as they sailed by. Their pictures showed the massive destruction wreaked by Hurricane Dorian back in September. But folks are trying to rebuild as best as they can with the help of volunteers like Nath and Brian.We’ve spent the last 5 days at uninhabited islands north and east of Grand Bahama where hardly a green leaf is to be seen. Mangroves which thrive in salt water look dead with no leaves. Are they alive or did the 20′ high storm surge that flooded Freeport get them? Huge trees were just pulled from the ground and thrown into ragged piles by the immense winds. Others were snapped off at the trunk.We can’t imagine the horrors which those folks who stayed experienced. I don’t think I want to know.Here at Moores Island, almost every building in the tiny settlement of Hard Bargain has a tarp on the roof. Though it’s Sunday, we can hear some sounds of construction. It’s quiet though. Kids laughing, the odd potcake barking (local dogs, stray or not).Our boat is covered with salt from our rather lively 25 nm sail here across the shallow Bight of Abaco. It was kind of like sailing on Lake Erie as it was so shallow! But Lake Erie doesn’t have the dolphins which came to greet us either!!They came leaping toward the boat as we motored out of a skinny, shallow, nail biter of a channel to get into the Bight. 7-10 lovely dolphins. Some large, some smaller, all very busy. Were they fishing? Who knows but wow they were amazing.They stayed for about 20 minutes, then they were gone.We pulled out the jib (our small front sail), set the Autopilot and sailed the Bight to Moores at about 6 knots average speed.Now the Skipper is resting and I’m thinking about supper and how damn lucky we are.Bye for now! 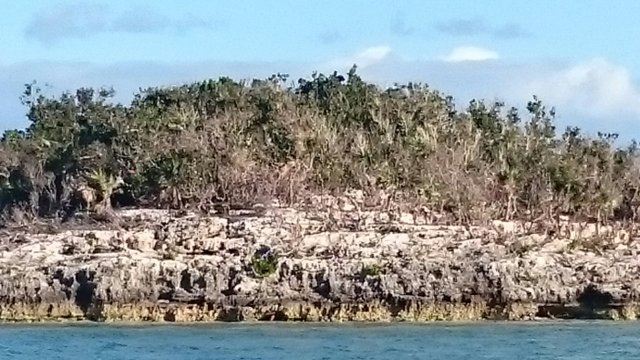 Sailing (and other) adventures of Carleen and Jim often featuring us sailing or racing our trailerable trimarans.
View all posts by Carleen&Jim →
This entry was posted in Bahamas 2020. Bookmark the permalink.