There have been times in the past when the tiny village of Killarney, and indeed a good part of northern Georgian Bay, becomes enveloped in a dense shroud of fog.  The morning of our last day in Killarney dawned with a beautiful sunrise…just before a thick fog socked in the area! We were moored just across the narrow channel from Killarney Mountain Lodge and I could not see the buildings, docks or boats on the mainland shore.  It was so thick that our friends’ boat on the next mooring ball just feet away was barely visible at times! It was very eerie as you could hear people speaking over at the Lodge through the gray haze.

The fog burnt off as we helped our friends on Adventure get ready to head home and completed some chores such as doing laundry, shopping for a few provisions, filling up the gas and fresh water tanks. By early afternoon, the remaining three boats in our small fleet were ready to sail eastward to a nearby anchorage for the night.

We headed into Killarney Bay toward Collins Inlet.  We figured that we would anchor just inside the inlet at a place rather blandly named Mile 58 on our Navionics charts notes. Then the next day, head back around the outside of Philip Edward Island and Beaverstone Bay the next morning toward the Bustard Islands…an eastward sail of about 25 nautical miles.

The anchorage at Mile 58 was tucked behind a couple of islands just off of the narrow passage through Collins Inlet. I imagined it would be a quiet spot and it was despite being very close to some of the wilderness campsites of Killarney Provincial Park.  We saw several folks kayaking and canoeing from groups of campers along the nearby shore of the inlet. Jim took the opportunity to tool around in the kayak with his fishing rod. He hooked one or two fish, probably large mouth bass, but choose not to keep them.

We enjoyed a lovely Happy Hour on the warm rocks of the small island which we anchored off of.  The scenery was calm and peaceful…the multi-coloured rock of the Canadian Shield, a variety of coniferous trees and cool, clear water all contributed to my ideal vision of this part of our county. Sadly, any blueberries or raspberries had already been picked by lucky campers or bears.

The next day dawned rather gray with thick, heavy gray clouds filling the sky.  But there was some wind and we made out way back out the mile or so to the open part of northern Georgian Bay to head east.

As we neared the entrance to Beaverstone Bay, I happened to get a momentary cell signal and decided to check the weather again.  Now there were indications of a strong storm approaching which had a small area of angry purple in the radar …heading right for us.  We lowered the sails, radioed our friends behind us and scampered under motor for cover in Beaverstone. We all tucked up against the western shore of the entrance and watched the dark clouds race overhead.  The main part of the storm missed us and moving over the mainland to our north. Some heavy rain accompanied the storm but any strong winds that were part of the storm must have passed over us. All of our anchors held and we were safe. Whew!

There was no cell signal within Beaverstone Bay but after an hour or so, we reckoned that the storm had passed. We nosed back out into Georgian Bay and made for the Bustard Islands, still 16 nautical miles away.  Finally the three lighthouses on the western side of the islands greeted us as we entered the main passage into the west anchorage.  We tucked Thunderstruck up a very narrow side passage where we anchored and tied to shore as there wasn’t any room to swing at anchor.  Blue Heron anchored with more swing room at the entrance and Cuencanita anchored a little farther out among the other cruisers in that spot. One interesting note about this place was the warning we’d gotten over the VHF radio from one of the boaters:  they cautioned us to have an eye for a white bleach bottle in the anchorage. It marked a submerged utility trailer!  He didn’t want us to get our anchors snagged on it!  We think it must have sunk when the ice melted sometime.

The Bustard Islands have all kinds of nooks and crannies where boats can anchor or tie up to and we all expressed how we wished we could explore them more. But time was of the essence as we wanted to be home by the last weekend in August.

The next day we motor-sailed south from the Bustards outside of the small boat channel toward Alexander Passage. The winds built and it was a pleasant 24 nautical mile downwind sail under blue skies.  Thunderstruck slid into Alexander Passage first so we decided to head a couple more miles farther into Bayfield Inlet to get some fuel. We stopped at a private boat club that had a fuel pump.  They did sell gas to non-members which was nice.  We anchored in same small bay off of Alexander Passage which we had anchored at before. As it was getting late in the season, and with none of the American cottagers around, it was pretty quiet in the passage.

The warm sun dawned on the rocky shore beside us the next day.  We decided to once again sail southward if the wind was in our favour…and it was.  Back out of the passage into Georgian Bay we went.  We had planned to make for Kilcoursey Bay at Killbear Provincial Park near Parry Sound.  The trip was about 27 nautical miles with a building wind from the northwest.  Jim and I decided to gunkhole (pick our way) through some shallows off of Point Au Baril.  What could possibly go wrong? Let me just say that not all of the 30,000 islands in Georgian Bay are now above water! It is a high water year, with the lake level almost 5′ higher than the chart datum, so many of the rocky ledges out there were below the surface.  We kept a very sharp eye on the charts and on the colour of the water with our polarized sunglasses to cut down the sun’s glare.  The outer shoals helped to smooth the growing waves as well, so we were pretty confident in our ability to get through … and we did!  It was pretty hairy in the end and I don’t think we’d try that again if the weather were any different.

Speaking of hairy…the approach into Parry Sound grew rather exiting as the wind and waves had built during the afternoon.  At times our speeds reached over 10 knots! The sea state was growing rougher and we were grateful to make the turn into the Sound past the big Red Rock Lighthouse in Georgian Bay.  I double-checked our approach to ensure that the lighthouse stayed to port (the left side of the boat) as it marked some nasty shallow shoals.

We flew along in the Sound to Kilcoursey Bay and dropped anchor.  We tidied up and relaxed for a while as we awaited our friends. Suddenly I noticed that we were dragging anchor! This was unusual as our 15 kg Rocna anchor is pretty reliable but to be fair, we maybe hadn’t backed down hard enough to set it.  We checked the depths and the type of bottom (mud, sand, rock, weed etc.) on the chart and moved in much closer to shore and re-set in sand.  This time the anchor held.  The others made their way into the bay after a challenging sail to Parry Sound. We prepared Happy Hour for all on our boat and we were grateful to be out of the big winds that had come up ahead of a cold front.

The following day we motor-sailed through the small boat passage where the dramatic landscape was the kind to inspire painters, past Sans Souci Island where we used to enjoy fish & chips. There was no stopping that day as we were on a mission to beat the rain which was headed our way.  We made for Indian Harbour where a small Inukshuk greeted us with a thumbs up.  We squeezed everyone in along the lee shore and as the winds were expected to be strong, Blue Heron went in quite tight to shore.  The winds and rain came but we were still able to enjoy a last dinner together on Cuencanita as we would go our separate ways the next day.

It was wonderful to spend four weeks cruising with our dear friends in what I consider to be some of the prettiest fresh water cruising grounds in our country.  Our views would change with each new anchorage.  We look forward to exploring more new places as well as familiar spots next summer. Fingers crossed. 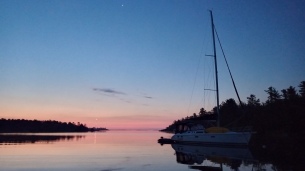 Killarney Channel before the fog 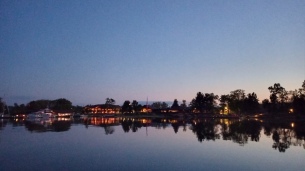 The morning fog rolled in

Large Mouth (the fish I mean!) 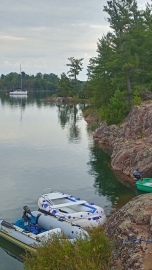 Happy Hour on the Rocks

Western Approach to the Bustard Islands

Anchored and tied to shore 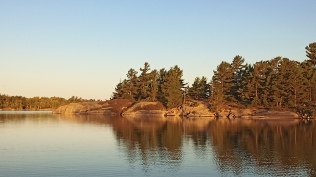 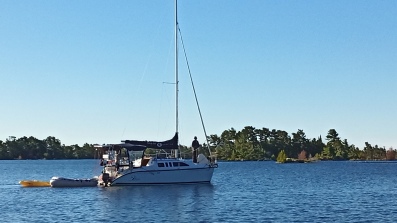 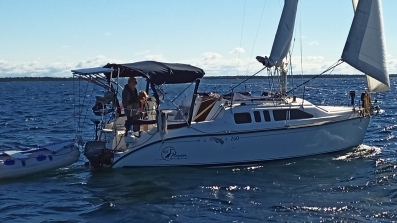 Great day for a sail south 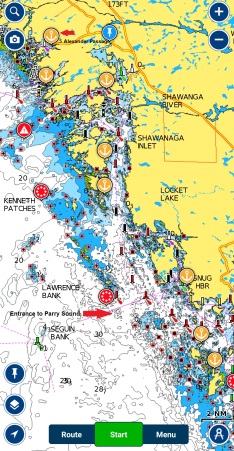 Good speed on a broad reach

Smaller waves inside the Sound!

Flying through the Sound 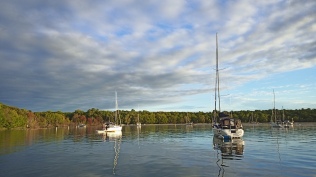 Anchored at Kilcoursey Bay off of Killbear Provincial Park

Ode to the West Wind 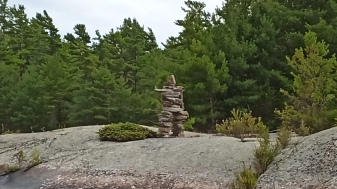 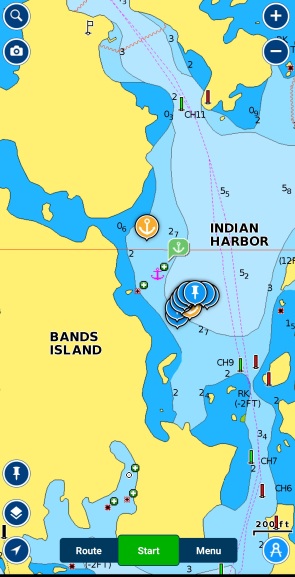 Our swing at anchor (blue pins) in Indian Harbour

Click on the Links below to watch the videos.

Sailing (and other) adventures of Carleen and Jim often featuring us sailing or racing our trailerable trimarans.
View all posts by Carleen&Jim →
This entry was posted in North Channel 2020. Bookmark the permalink.