As Canadians boating into the US,  we are supposed to fly a yellow Q flag until we are cleared in.  So upon our arrival into US waters on Saturday, we dutifully hoisted our Q flag (the Bahamian courtesy flag came down when we left Bahamian waters as we were enroute to a new country). By the way, never fly a courtesy flag over your own flag or vice versa as it means the country on top is making war against the one below!!  Our Canadian flag was flown at the stern which is appropriate for our kind of sailboat.

When we were close enough to Port Everglades to make a call, I had no signal on my US cell. What??  It had worked before we left for the Bahamas! No problem, I thought, I’ll just use my Canadian cell to call the 2 different 1-800 numbers for US Customs….Nope.  Didn’t work. What the heck?  So I chewed through some Rogers roaming data (!) and tried every number I could find. But it being later in the day,  nothing was open. Ok…as Scarlett O’Hara said “Tomorrow is another day.” We had tried.

As you know,  we tied up at the Hyatt Regency Marina for the night. We were safe and in excellent company. If only someone were to have played that grand piano down the dock,  it would have been perfect!

The next morning: Sunday,  February 26.

We quietly slipped away from our swanky slip (that we probably couldn’t afford anyway) .. One does tire of looking at stainless steel anchors and gleaming wood after all.

I kept trying various ways to contact Customs. No luck Until finally I got a hold of one fellow who said we can come to the Customs office but we must call one of the 1-800 numbers. We stopped  in at a fuel dock to see if they had a phone we could use since i still couldn’t figure out what was wrong with my US Cell. The guy couldn’t let us use his business phone but he did print off directions to Customs…which was only a mile or two away as the crow flies. But he also said we could tie up at the fuel dock but for 1.50@ft per hr. The Value Conscious (ie frugal) crew decided to go to the state park.  It was free and had two good ramps to pull out at,  lots of parking.

We noticed that the cruise ship docks were all full again… Really full! I think I counted 7? The largest two were docked next to the Intracoastal Waterway which made that channel seem very narrow.

Customs opened at 8:00 am. We were at the park by 7:30 so we started taking gear out of the boat, getting her ready to haul out.

Based on some past experiences, we thought only the Captain needs to go to Customs with all of our passports. So we decided to call a cab for Jim. And we waited, and waited… And waited some more.  We called the cab company two more times.  No dice.  Then we tried a different a company and finally a fellow said he’d be there shortly. Sure.

During this time we kept stripping the boat. At one point a cargo ship pushed by  tugs passed by in the waterway. We were happy that we weren’t in the channel when that came by! Not much room there.

Finally around 10:30 I called the cabbie again.  He asked me what the name of the park was again. On my chart and map it was called the John Lloyd State Recreation Park.  He asked me again for the address,  which of course, I didn’t have. By 11:00 he finally showed up and off Jim went.

Here is Jim’s story at Customs. He and the cabbie,  who was from the Sudan originally, arrived and Jim was told they couldn’t help him until he spoke with someone in Miami on the 1-800 numbers! And he couldn’t let Jim use a phone. So the really nice cabbie kindly let Jim use his own cell. After 45 minutes, he finally got a human! He was asked for our boat info and crew info then got our Arrival number. This precious number meant that Jim could finally speak with the Customs officer.

The Officer cleared Jim in ahead of someone who he was already working with! He asked hardly any questions but did ask where the rest of the crew were? Back on the boat said Jim. That’s no good said the officer, they have to be here in person! Oh man. So Jim and his best bud the cabbie headed back to the dock where Paul and I proceeded to go to Customs in the cab.  Now off to the airport  to pick up the truck and trailer.Yes,  the meter was running the whole time.  $150 in cab fare later we were legal!!!

The tri came with heavy duty mast raising and lowering bars and a gin pole rig. The wind had come up but was blowing from behind us. The guys figured out how it all worked as the time ticked on.

Also,  the cruise ships were loading all day so you’d hear announcements etc. We were told that there were actually 9 ships loading passengers,  which was unusual. That translated to about 30,000 people all trying to get to the port in cabs!!!  I must say our cabbie from the Sudan was awesome. Without him we might still be here illegally. Thanks guy from Sudan.  We wish we knew your name.

All ended well! As the Princess ship leaving port blared out the Love Boat theme (!), we got the mast down and all tied up with about an hour to spare.

Luckily, we had spotted a motel near Dania Beach and had booked a room earlier. Rooms fill up quickly around dusk. So we pulled into the motel 6 with great relief. There was lots of parking and a recommendation for supper at Anthony’s just down the road was spot on. Get this, our server was a really nice guy named Mackenzie who lives on his 22′ Bristol sailboat!!  And…he works in a boatyard by day. We were talking boats so much with him that we hardly had time to eat. Great food as well.

Despite the crazy logistics of the first part of the day,  it ended great.

Pics below show where we tied up at the Hyatt Regency marina and the mega yachts there, the cruise ship port, our state Park and ramp, where the truck and trailer were stored over at the Executive airport, and taking the boat out and de-rigging her all by sundown with the biggest cruise ship beside us, and finally our celebration at Anthony’s, Dania Beach. 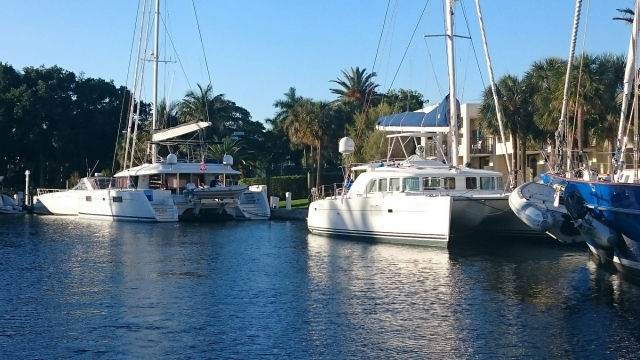 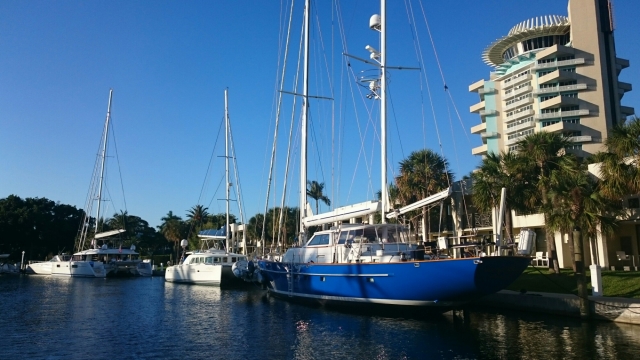 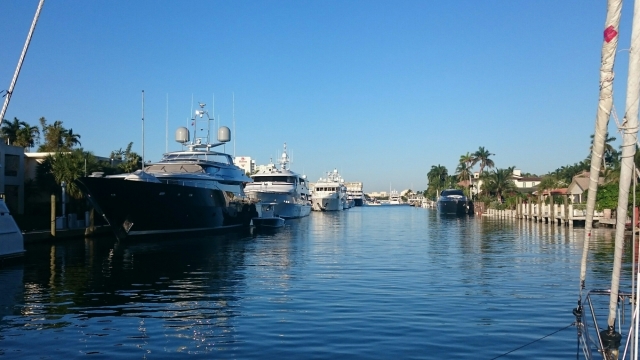 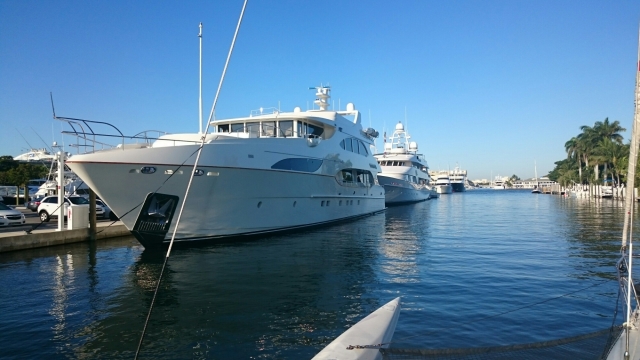 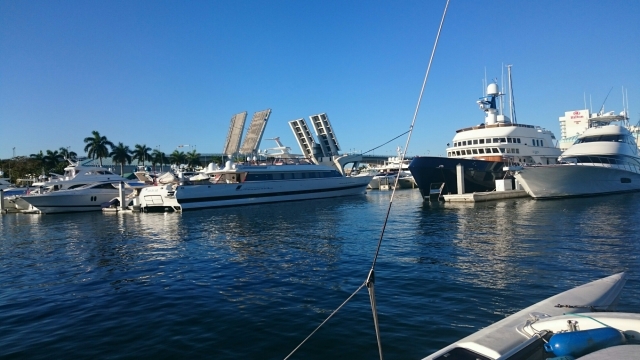 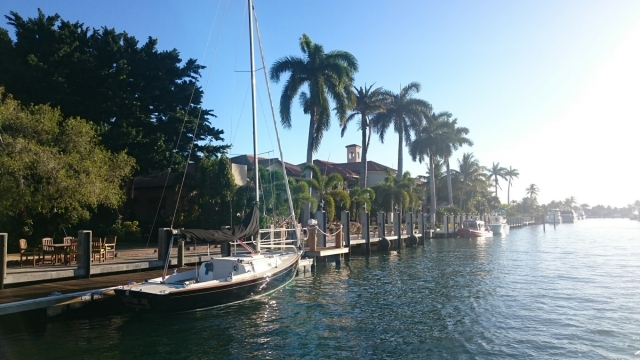 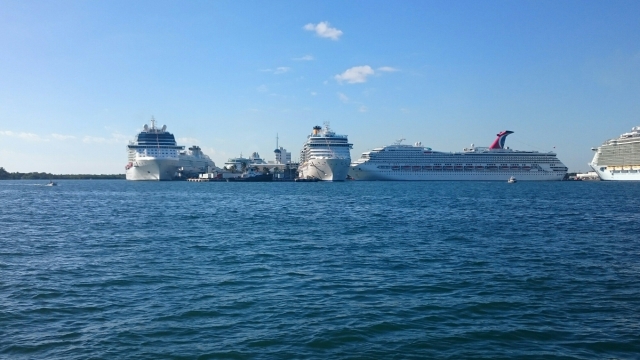 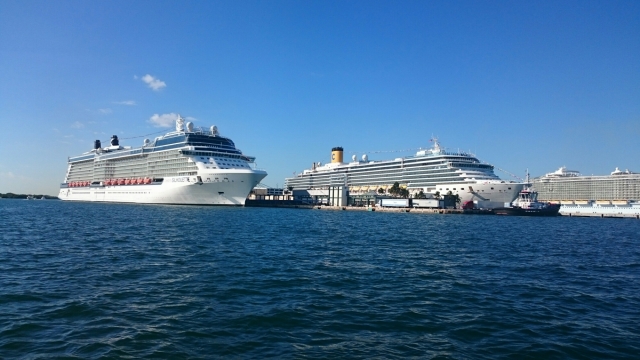 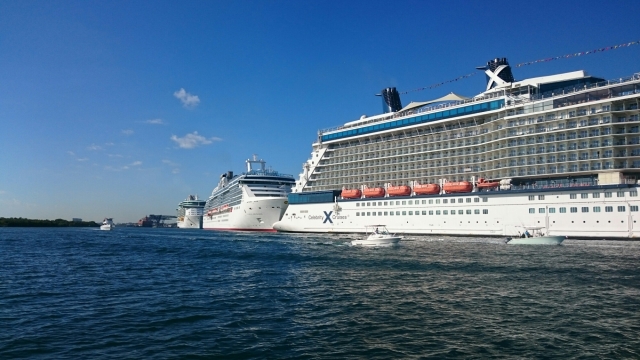 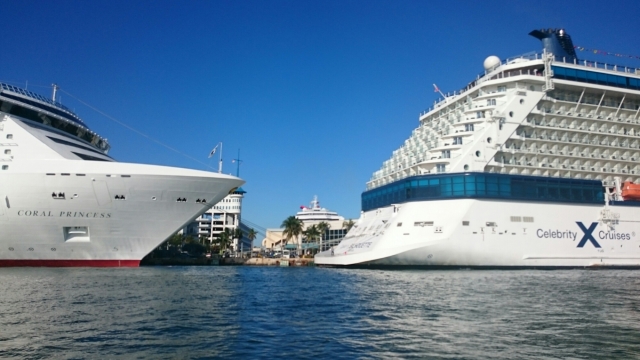 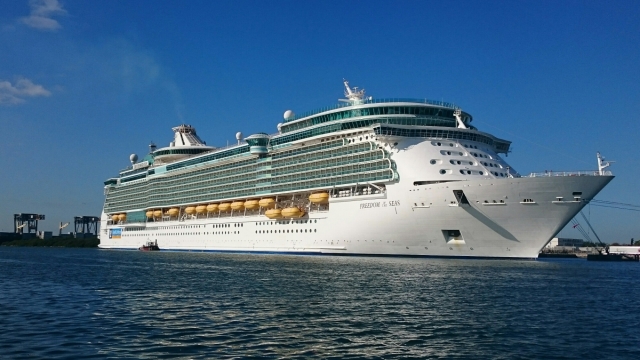 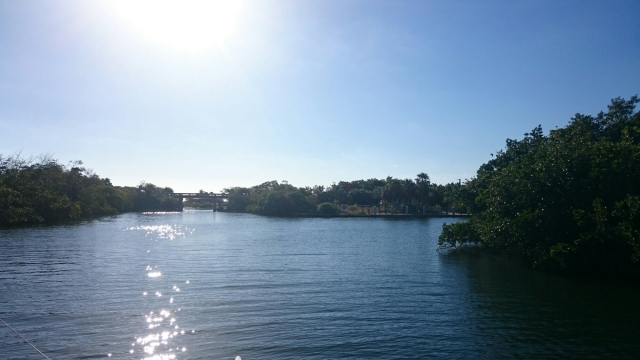 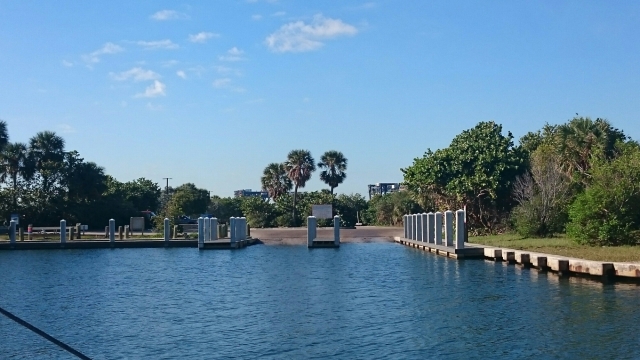 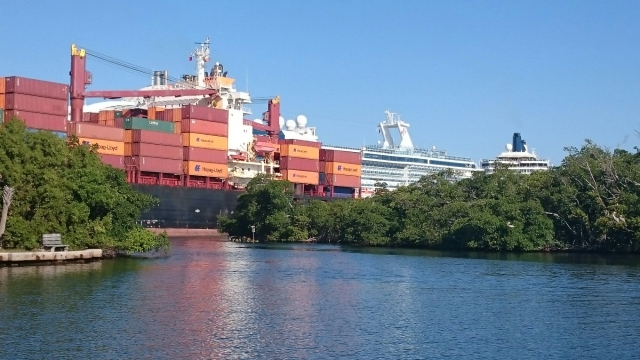 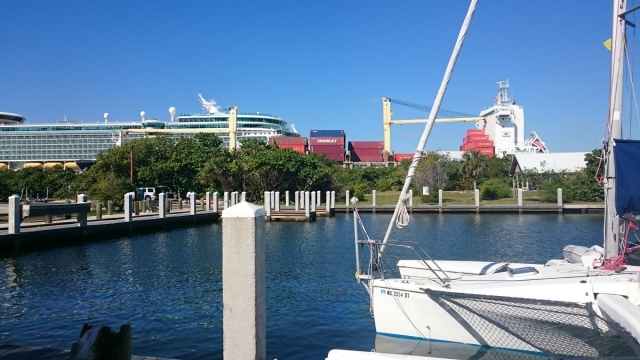 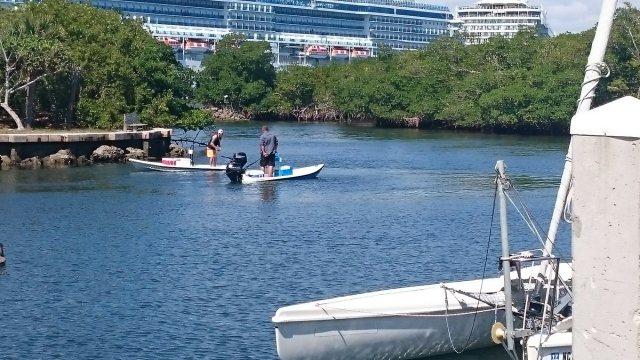 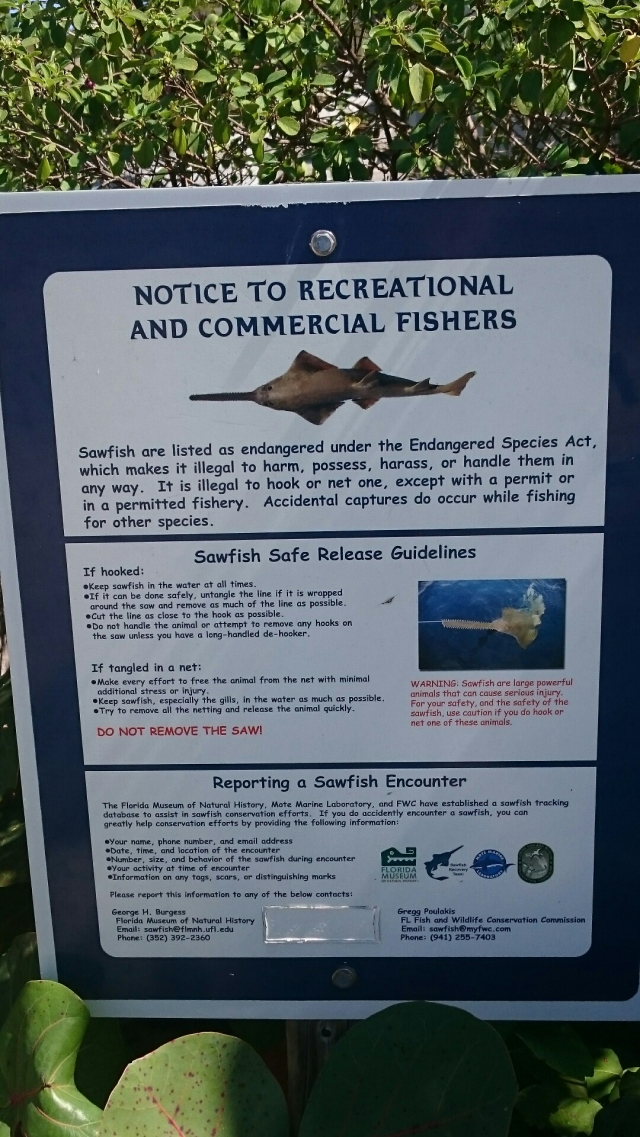 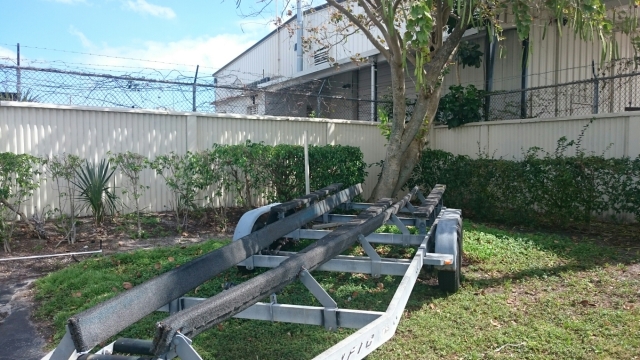 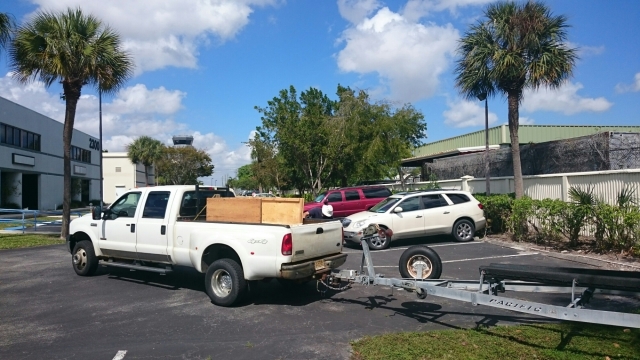 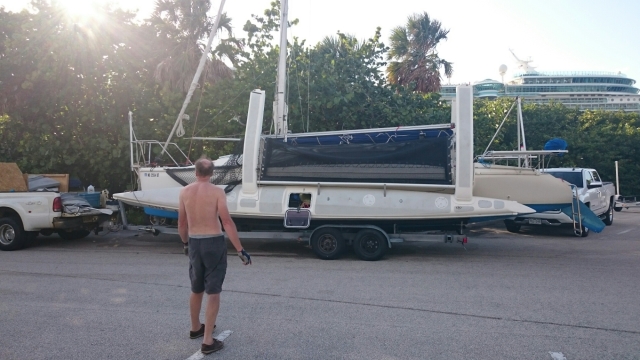 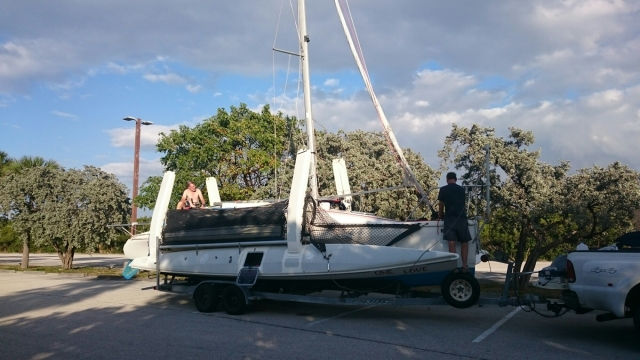 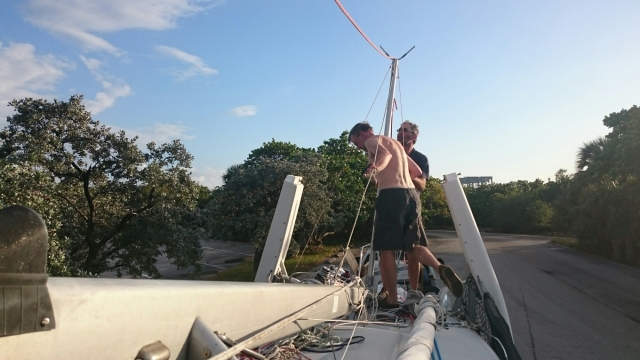 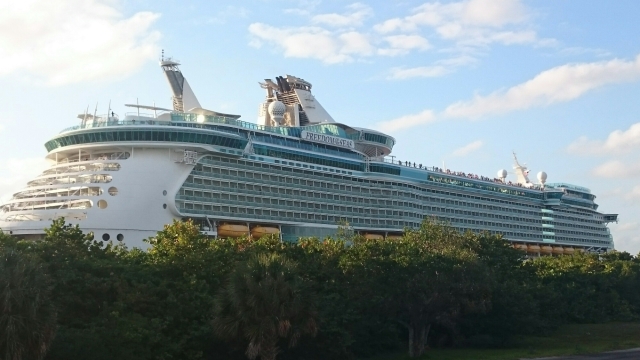 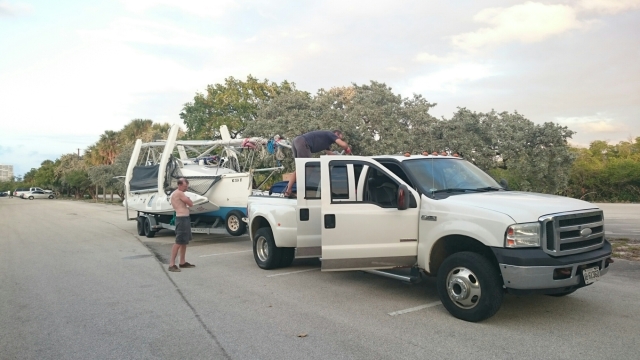 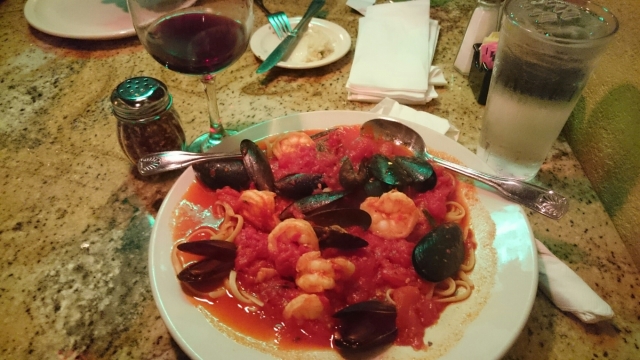 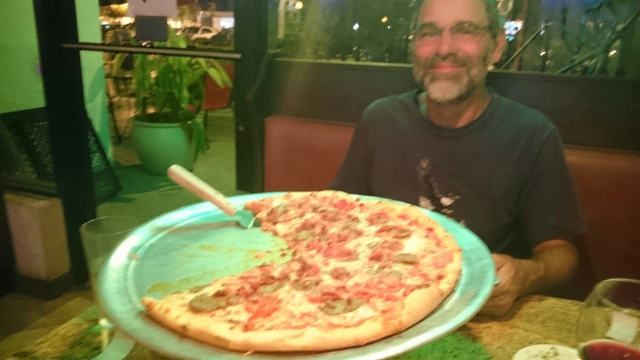 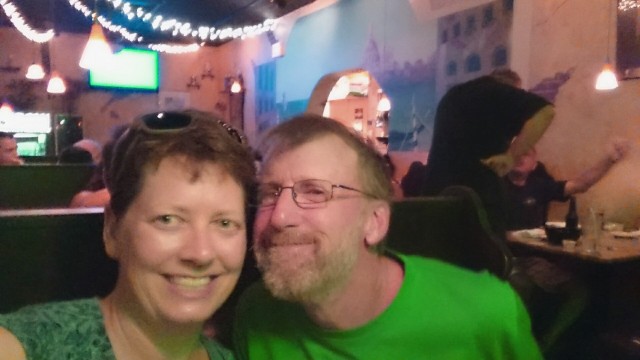 Sailing (and other) adventures of Carleen and Jim often featuring us sailing or racing our trailerable trimarans.
View all posts by Carleen&Jim →
This entry was posted in Bahamas 2017 Adventure - Saving an F-31. Bookmark the permalink.